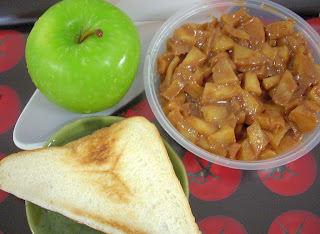 I love Apple Pie Filling very much and decided to use it to make sandwiches. In this recipe, I replace butter with olive oil. The amount of cinnamon powder can be adjusted to personal preference.
Preparation: 10 mins, Cooking time: 10 mins

Method
1. Heat the oil in a non-stick work.
2. Add in the green apple, cinnamon powder and sugar. Stir fry for 10 minutes or until apple is soften. Leave to cool.
3. Place the cinnamon apple filling onto the bread and make toasted sandwiches according to the instruction of sandwiches makers.
Posted by a veg*n @ Blog*Spot at 10:36 AM

good idea! this will stop all those insane cravings for apple pie! :)

Found this in VSS forum:
Question by cathylmg:

Answer by Halimah:
When I was learning how to bake, the chef used canned apples. Drain away the syrup, chop up the apples, cinnamon/nutmeg and some corn starch. That's how MacD gets the apple mushy. If you use fresh apples, it will be crunchy, not mushy.

Answer by Veganic:
If you cook the fresh apples before you put it in the pie to bake, it will be mushy. That way you can also control the amount of sugar.