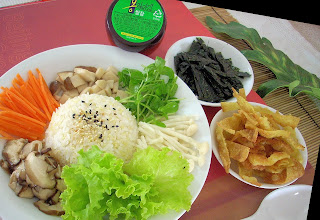 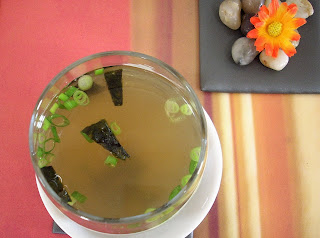 This recipe is actually derived from Mushroom Bibimbap! As some kids do not like spicy food, I have replaced the Gochujang (Korean Hot Bean Paste) with Doenjang (Korean Soybean Paste).

Kids love Deep-fried food which are crispy and produce a lovely sound when they munch on it. So, I added a little plate of Crispy Wonton Strips together with some Korean Seaweed. It can be eaten on its own or added to the rice.

Keep the water for blanching mushrooms, and by adding a little bit of salt, light soy sauce, before garnishing with chopped spring onions , coriander or enoki mushroom, you can enjoy a bowl of clear soup too!

Oh yeah, don’t forget to let the kids have some fun – use a BIGGER bowl, so that the kids can mix and toss all the ingredients without messing up the dinning table – learning how to “stir-fry” rice like a chef! Get the kid to wash the rice and cook it too, if they want to help out.
Preparation: 20 mins, Cooking time: 25 mins

Method
1. Millet Rice: Combine all the ingredients into an electric rice cooker, mix well and turn it on. When done, leave the cooked rice to rest, covered, for 5-10 minutes. Set aside.

2. Seasoned Shiitake Mushroom: Transfer the mushroom to a big bowl or plate. Stir in the sesame oil, light soy sauce, sugar and mix well. Sprinkle some sesame seeds and set aside.

3. Seasoned Eryngii Mushroom: Transfer the mushroom to a big bowl or plate. Stir in the sesame oil, light soy sauce, sugar and mix well. Sprinkle some sesame seeds and set aside.

4. To serve: Divide millet rice into individual serving bowls and garnish with sesame seeds. Arrange seasoned shiitake mushroom, seasoned eryngii mushroom, carrot, pea shoots, local lettuce and enoki mushroom on top or on another serving big bowl or plate. Serves with a plate of Doenjang.
Posted by a veg*n @ Blog*Spot at 11:28 AM

Hi, I love your blog and sunny's blog. Do you know what do they do to the hor fun before they cook the
"zhu chao" style hor fun? Their hor fun got a bit brown colour one. The pic that is in Sunny vege food.

hey but does it cook well with the electric rice cooker? i really appreciate this recipe..thanks

Hi Beng,
Thank you. Oops, so sorry, I missed your comments.

We might not be able to recreate that part at home. We needs the special wok (iron or metal, can't quite remember and the "Big" fire) that Zi Char uses. They stir-fry the hor fun with oil and soy sauce, the aroma and taste and colour is generated by those wok using big fire (wok hei).

Even we get those wok, the fire from the gas stove is not strong enough to cook.

Hi Uno,
Thanks :) Just try and have some fun with korean food.
Cheers